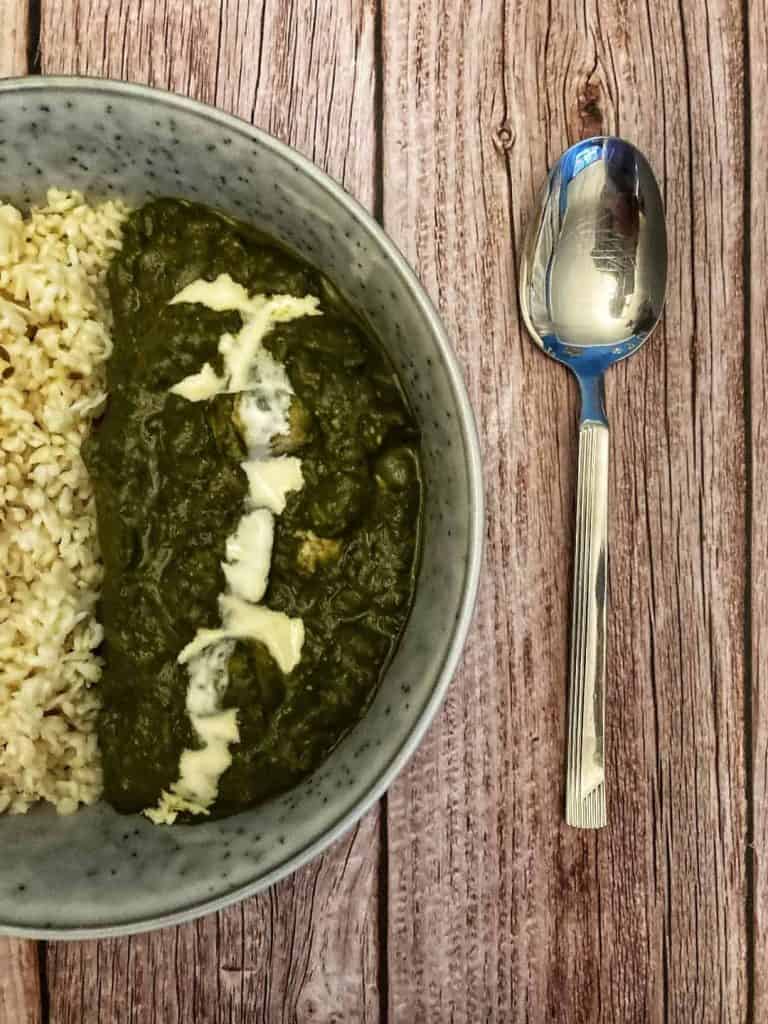 Saag Paneer vs Palak Paneer is a great battle, isn’t it?

Palak is the Hindi word for spinach, while saag refers to leafy greens in general, which in this case can be a mixture that includes spinach, or palak.

So, Palak Paneer vs Saag Paneer, who wins? Well, in this recipe I used palak, however you can use saag if you prefer.

This dish is very special for me because it is a dish I cooked for myself exclusively! This is something Jay would never eat nor order in a restaurant as he dislikes both spinach and cheese (what kind of person hates cheese?), but I love both and have often ordered it in restaurants or as a take-away option.

This palak paneer recipe is very easy to follow, extremely tasty, and low in calories; there is no cream necessary (I have used some just for garnishing) and the paneer is low fat, although the other ingredients are very low in calories so you could use full-fat cheese and perhaps divide this into five or six portions instead of four, if necessary.

What is saag paneer?

Saag paneer is a spinach-based curry that is flavored with spices, tomato, and onion among others, and enriched with cubes of Indian cottage cheese, paneer.

Spinach and paneer (Indian cottage cheese) are the two main ingredients in this recipe and they are both extremely nutritious in their way.

Spinach is one of the foods we now know as ‘superfoods’, which is a group of foods that are highly rich in nutrients; spinach (palak) is very low in calories and is important for bone, hair, and skin health.

The nutrients in spinach I’d like to highlight are Vitamin C, iron, calcium, and magnesium.

Ascorbic acid – or Vitamin C – is very well known and mainly associated with the immune system, but it assists with many other body functions as well; this vitamin is necessary for the growth, repair, and also the development of body tissues, it is needed for the formation of collagen and it also assists with the absorption of iron. In addition to this and many other functions, Vitamin C is also involved in the good maintenance of teeth, bones, and cartilage.

Iron is a nutrient that greatly affects the body’s energy usage and one does not notice its importance until they finally start having enough! Iron assists the body with preserving many vital functions, such as regulating the body temperature, assisting with the immune system and the gastrointestinal processes, energy levels, and focus. As iron is better absorbed by the body when consumed with Vitamin C, it is good to pair food rich in iron with Vitamin C-rich foods, such as citrus, although spinach has both already.

Calcium in spinach is a topic worth exploring as it is the demonstration of how the same nutrient is absorbed differently by the body when present in different foods; although spinach is rich in calcium, which is notoriously known for assisting with teeth and bone health, it is less absorbed than the calcium found in dairy food. Spinach is rich in oxalate, which attaches to calcium and helps the body eliminate it, especially when it is too much for the body, making it difficult for spinach calcium to be used by the human body.

Magnesium assists in hundreds of biochemical reactions occurring in the body every day, and spinach is one of the best sources of this dietary nutrient. Magnesium is used for maintaining the function of nerves and muscles, the regular heart rhythm, assisting in preserving a healthy immune system as well as regulating blood pressure, among many others.

Paneer, or Indian cottage cheese, is made by curdling milk using acid that is derived from food, such as citrus or vinegar, which is then separated using a muslin cloth and finally pressed into blocks, which is what is then available to purchase.

Paneer is an excellent source of proteins, especially in vegetarian diets and it also contains nine essential amino acids. Proteins are very important as they are what ‘builds’ our cells, give them volume and they are also essential for the immune system, the repairing of body tissues, maintaining growth, and the blood volume. Proteins are also necessary for growing and maintaining muscles and they can be found in both animal and vegetal sources.

This recipe is easy and below I have divided it into easy-to-follow stages, and as long as you follow them you will be ready for the next stage before you know it.

You start by preparing a spinach, cashew, and chili puree which is set aside and the main ingredient to give color to this bright and delicious dish.

Once that is done, the chunky curry base is created with a few whole spices (masalas), onion, tomato and ginger, and garlic paste; once all of these ingredients are cooked and the tomatoes are mushy, some fenugreek, garam masala, and water are added, together with the spinach puree.

While these lightly simmer away, the paneer is diced and lightly pan-fried (optional step) and then added to the curry, which is ready to be served! 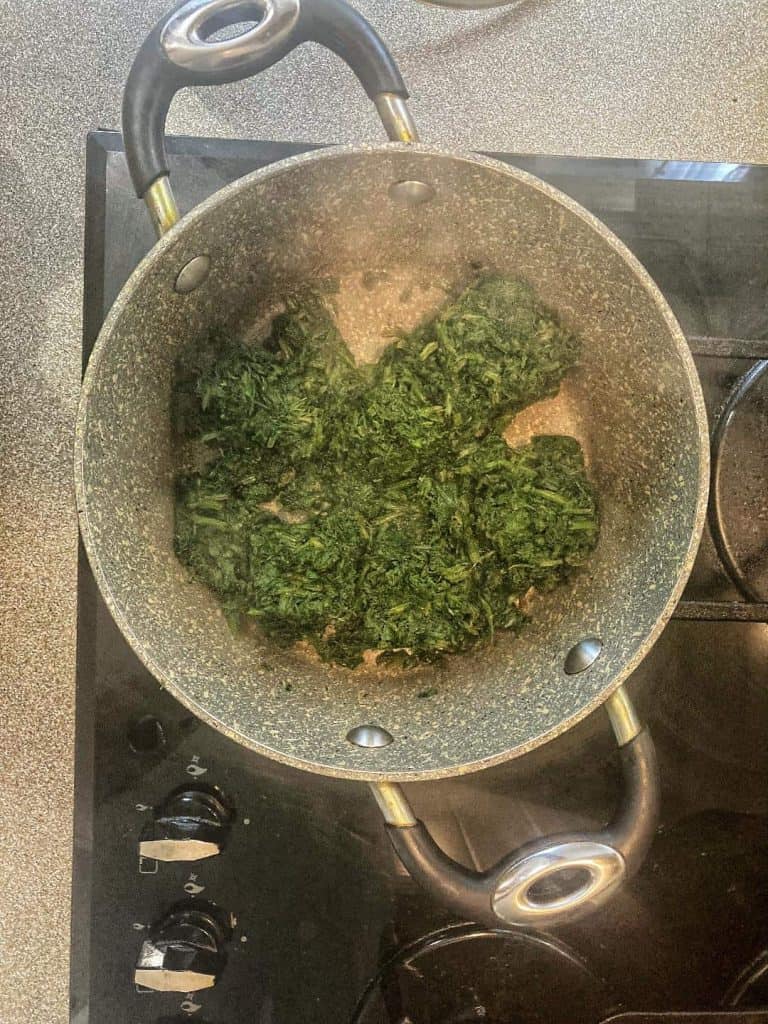 Preparing the chunky curry base 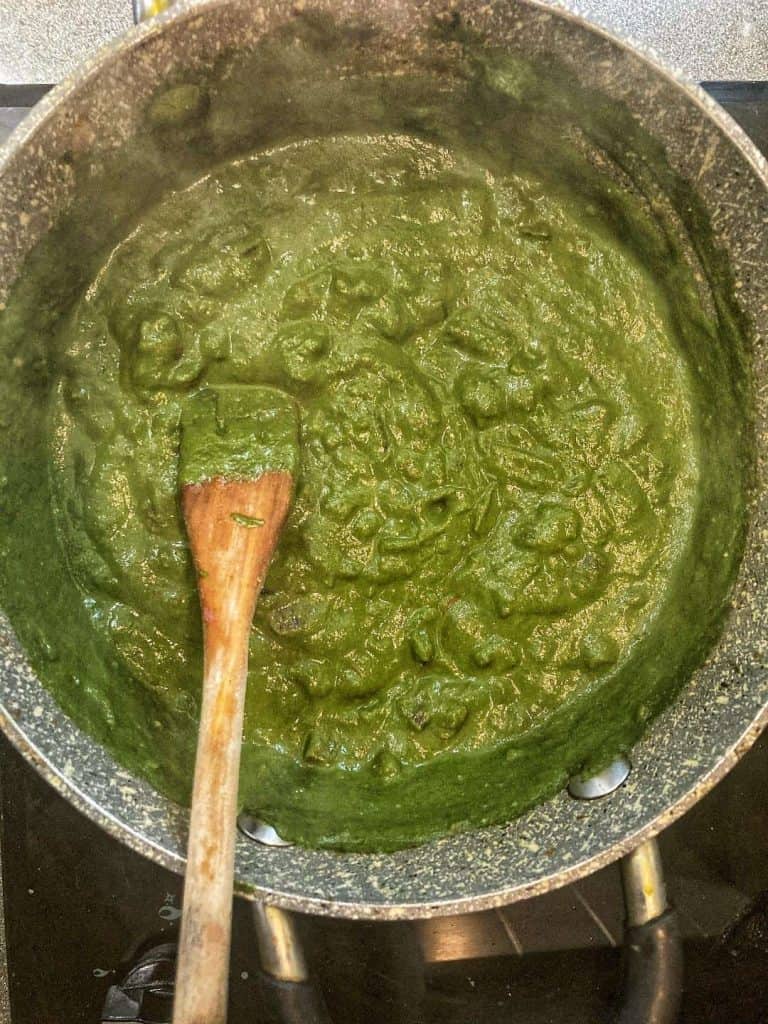 Is this palak paneer instant pot-friendly?

While you may find people saying that their palak paneer recipe is instant pot-friendly, I am sure it won’t be as tasty and authentic as this recipe! Yes, this recipe may mean that you need to spend half an hour in the kitchen, but it also ensures that all components of the curry have the right consistency, from the firmer paneer to the creamy palak and the pieces of onion. This recipe is easy to make, quick and tasty, while also being low in calories!

This recipe, prepared as described, has only 262 calories per portion and these portions are very generous and filling!

As this dish has a cheese component its calories may be a concern, however, I have used low-fat paneer (Apetina Paneer) which is delicious and, as cottage cheese and paneer, are normally quite bland in taste whether they are full or low fat, the important part is to pair them with a flavorful ingredient anyway, in this case, this delicious saag curry!

The only ingredient to change in this recipe is the paneer, which can be swapped for firm tofu.

Something I love to do is use boiled potato cubes instead of paneer, which have a nice consistency and because potatoes work with anything!

If you are thinking of drizzling some cream on top for garnish, as I did, you can use a vegan one, although it is not necessary as the saag curry is extremely creamy already.

Can I use frozen spinach for this recipe?

This recipe uses frozen spinach, as where I am currently living it may difficult to find baby spinach, which is much less bitter than full-grown spinach leaves and it takes a long time to trim the stem of the bigger leaves, which give a lot of bitterness. Should you find baby spinach, you can lightly blanch the leaves and follow the recipe as written, but if not, frozen spinach ‘cubes’ can be easily defrosted on a low flame and used in this recipe; I purchased mine from the local Indian shop, as they freeze baby spinach leaves. I have added half a teaspoon of sugar to this recipe, as it has a sweet side, which also helps should your spinach be a bit bitter.

It is very low in calories, creamy although cream-less, and gorgeous to serve, as the spinach maintains its rich color.

If like me, you love spinach and cheese this is a great dish to prepare.

What to serve palak paneer with? Rice, chapattis, parathas… you have no excuses, as it works with everything and anything, also cauliflower rice!

Give it a go… this is another great fakeaway recipe! 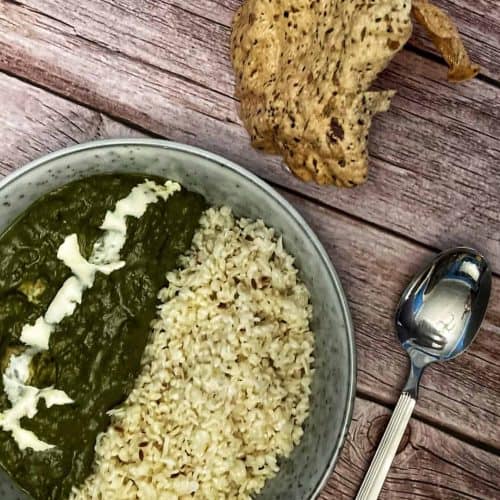 For the spinach puree:

For the Curry Base:

For the finishing touches:

Start preparing the base curry: 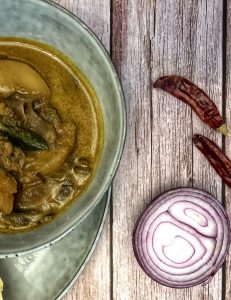 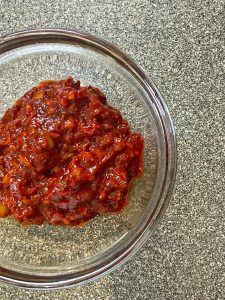 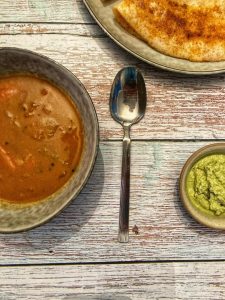 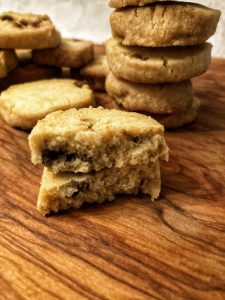 Shortbread Recipe | How to make Shortbread Cookies with Chocolate Chips 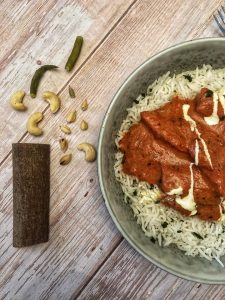 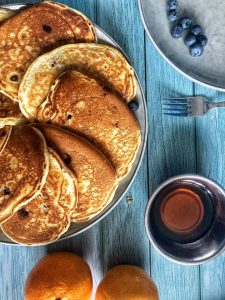 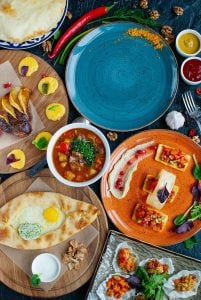 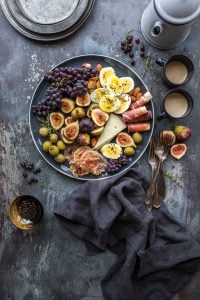 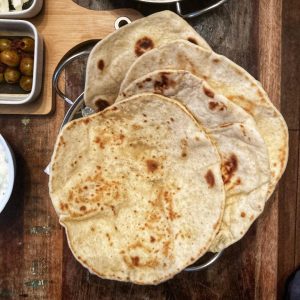